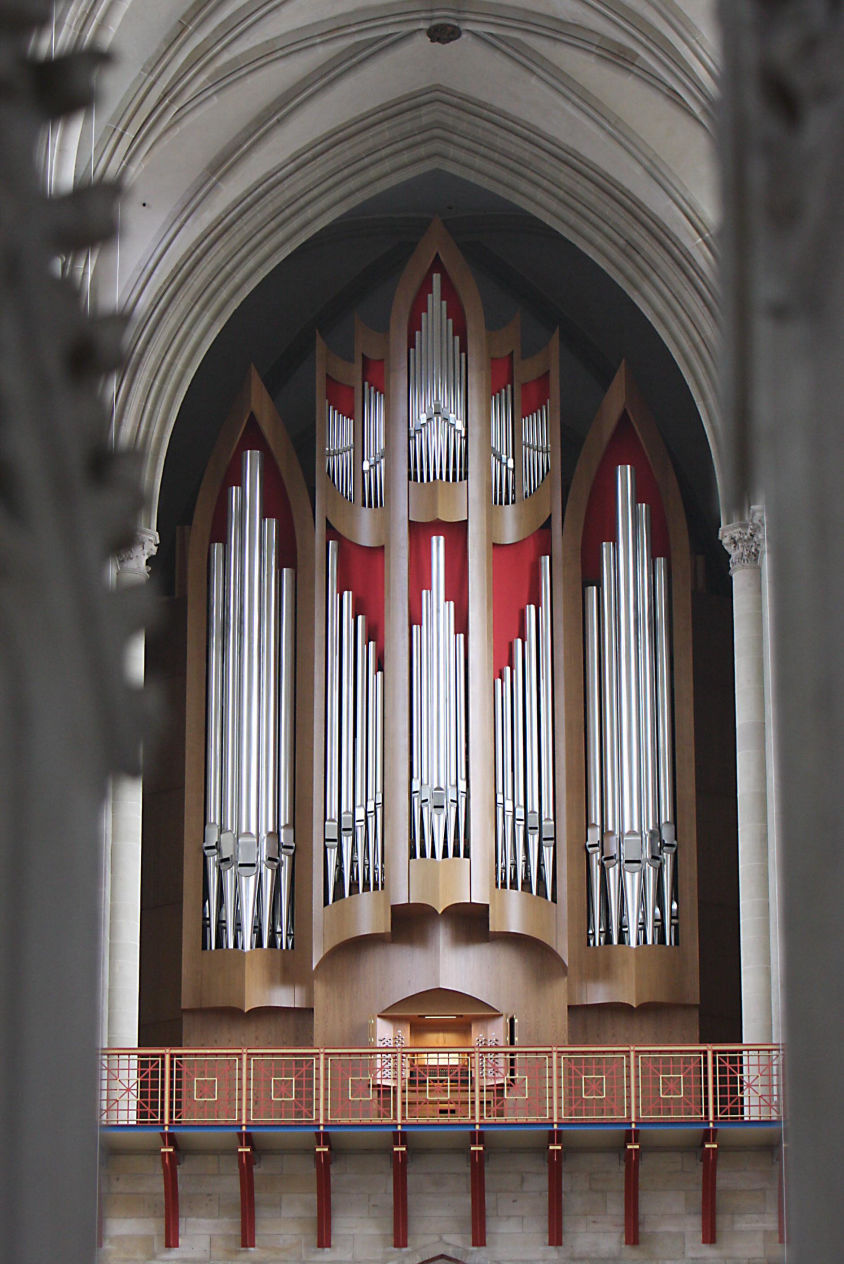 The plan for the new instruments at the cathedral envisaged a large symphonic instrument in an eclectic style for the cathedral, and a smallish (about 22 stop) organ in a style which, while ideal for Bach, would allow the convincing performance of a certain amount of repertoire for the Remter, which has the more appropriate acoustic for most baroque music. Not only would these two organs complement each other; they would also greatly enrich the Orgellandschaft of the town, which once had more instruments by Arp Schnitger than any other city after Hamburg but which was not blessed with good instruments at the time.

The first step in the realisation of the plan was the commissioning of the main organ. The contract for this was awarded to Schuke Orgelbau (Werder an der Havel); the project took several years to realise, and the organ was completed in May 2008 and dedicated on Trinity Sunday, May 18th. During the festival week the instrument was able to convince its hearers with its warm, colourful sound and its ability to dominate the very large room without ever being vulgar or overly loud. Voicer Hartmut Rönnecke and his team deserve enormous praise for their achievement, especially as the organ is in a style which represented a new departure for the Schuke firm (though they have enormous experience in the restoration of romantic instruments). The organ comprises 92 stops (and 1 transmission) on four manuals and pedals. The tonal backbone is a generous principal chorus owing much to Friedrich Ladegast, but the multifarious beautiful flute stops and the gentle but often keen strings have won much praise from visiting organists from many traditions.

The exterior design of the instrument is simple but striking; the facade is turned through many dimensions which makes for an interesting and plastic appearance. That only large pipes have found a place in the case (beginning with FF# of the 32’ Principal) works to the organ’s advantage when viewed from the cathedral, especially as the organ gallery floor is at a height of approximately 16 metres.

Essentially, the instrument has mechanical action; there are Kowalyshyn machines to the first and second manuals, and all normal manual couplers run through these.

The octave and suboctave couplers are electric, as are two of the pedal couplers; the tuba, the Chamade and some pedal stops are on auxiliary electric chests. The pedal, as can be clearly seen from the photo, is located to the sides of the organ; in the centre are the Hauptwerk, with the expressive Positiv behind it; on the upper level are the Solo, with the Swell behind that. The Chamade, while playable from the second manual, is located on the roof of the Swell. The case structure itself has no roof (the roof of the Solo division was removed during the voicing as this was found to be enormously beneficial).

The Specification of the organ was developed by Barry Jordan with Matthias Schuke, Hans Scheffler, and the other consultants involved in the project, Reinhard Menger, Reiner Schuhenn, Silvius von Kessel and Christoph Schulz. Scales were developed by the Schuke team; Michael Blighton of Mander Organ Builders was responsible for the tuba. The Solo clarinette originally supplied was replaced in 2011 by an historical English stop from a Brindley and Foster organ of 1914.

Here you can download the specification as a .pdf