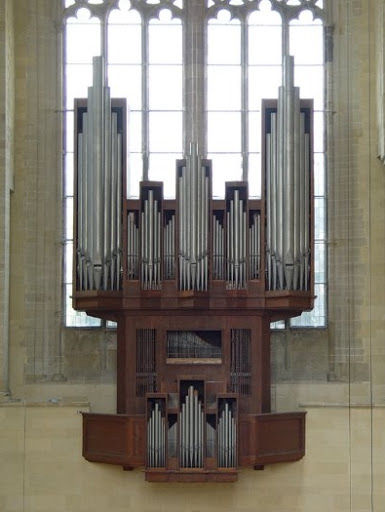 The challenge of building an instrument of 39 stops was considerable, but the Schuke firm met it admirably and constructed an instrument whose qualities are undeniable, with mild and singing principals and characterful flutes. Nevertheless, there were some oddities in the specification which diminished rather than increased its usefulness. Some of the reeds - no reeds were made in the GDR and they needed to be "donated" from the West, so organ builders had little control over what would be delivered - were also substandard; wind chests are partly of chipboard and the case was made (by a local carpenter) of very poor fir, painted brown; this is now badly split in many places and rather unsightly. A reconstruction of the case (keeping the design by Fritz Leweke, although making some small modifications to aid the tonal egress of the "Kleinpedal" whilst not deafening the organist, and possibly hiding the chromatic Brustwerk, which many find unattractive, but using better material) is planned.

For nearly 40 years, this instrument was simply "the organ", but after the completion of the new west instrument in 2008 it needed a name. Since it hangs over the door to the Paradise Porch, that was not difficult. Unfortunately, for all its many qualities, the aim of filling the cathedral with sound with a fairly modest organ by using the "swallow's nest' idea could not be achieved, because the organ is not in the nave but buried in the fairly deep transept, out of sight of nearly everyone in the nave, and consequently only indistinctly audible.

In 1994, the organ was in a terrible state and extremely dirty and a cleaning was carried out at the beginning of 1995, during which an attempt was made to louden it considerably. This also robbed it of a lot of its charm and, after the instrument had once again suffered badly after archaeological work in the building, another cleaning being necessary in 2010, the opportunity was taken to reverse some of these changes and to lay a mildly unequal temperament.

The restoration of the cathedral's High Quire, due to begin shortly, will make it necessary to dismantle the organ completely. We would like to take the opportunity to replace the case and the case pipes. Some other small tonal changes or improvements have been carried out already or are planned even before the instrument is taken down. There are no plans to alter the fundamental character of the instrument.

We believe that the following work is necessary or desirable to ensure that the organ remains played and valued for the next half a century.

- Dismantling of the organ and disposal of the current case (this is contaminated with the insecticide Hylotox and therefore requires disposal as toxic waste).

- Replacement of the case pipes, the stability of which is no longer to be guaranteed. Replacement with pipes in English tin, as in the main organ.

- division of the topboard and slider of the pedal stop "Bifra II" and re-installation of the conical 4' stop removed in the late 90's as a seperate stop. Construction of the necessary stop mechanism.

- revision or replacement of some reed stops

Pedal: Trompete 8’ to be new

BW: Vox humana to be new

Here you can download the specification as a .pdf

Made with Mobirise ‌